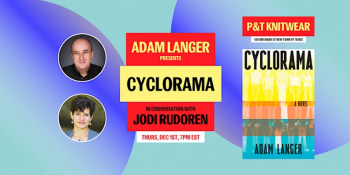 P&T Knitwear is pleased to welcome Adam Langer for a reading of his newest novel, “Cyclorama” (Bloomsbury)! A “finely wrought, raucously funny, and startlingly insightful” book (Chicago Tribune), “Cyclorama” is a deeply moving, propulsive story of ten teenagers brought together by a high school production of The Diary of Anne Frank that will shape and influence the rest of their lives. Adam will be joined in discussion by Jodi Rudoren, editor-in-chief of The Forward.

Evanston, Illinois, 1982. A group of students at a magnet high school meets to audition for the spring play. They are eager for the chance to escape their difficult everyday lives. Declan, an experienced senior, is confident he’ll get his first-choice role, but when the capricious, charismatic drama director casts Franklin, an unknown underclassman-and the two are seen alone at the director’s house-a series of events that will haunt the cast for years begins to unfold.

2016. The actors have moved on with their lives. Some are wildly successful, some never left their hometown, and some just want to be left alone. Everything changes, however, when one former cast member comes forward with an allegation dating back to the time of the play. The consequences of this public revelation will be far-reaching and complex, reverberating through all of their lives in unexpected ways.

“Cyclorama” is a deeply compelling story of ordinary people that brilliantly cuts to the core of what makes us who we are and how our pasts reverberate into our present and future. With remarkable tenderness and humanity, Langer reveals how the traumas of our youth continue to echo throughout our lives, in our politics, in our careers, and in ourselves.

Adam Langer is a journalist, editor, and the author of a memoir and five novels including The Washington Story, Ellington Boulevard, The Thieves of Manhattan, The Salinger Contract, and the internationally best-selling novel Crossing California, which was described in the Chicago Tribune by James Atlas as “the most vivid novel about Chicago since Saul Bellow’s Herzog and the most ambitious debut set in Chicago since Philip Roth’s Letting Go.” Formerly a senior editor at Book Magazine and a frequent contributor to the New York Times, he currently serves as culture editor at The Forward.

Jodi Rudoren has been editor-in-chief of The Forward since the fall of 2019. Before that, she spent 21 years as a reporter, editor, and digital innovator at The New York Times, including a stint as Jerusalem bureau chief and Associate Managing Editor for Audience Strategy. Her weekly “Looking Forward” column recently won the Religion News Association’s top prize for commentary and was a finalist for the Deadline Club’s commentary award.

Stay tuned for next week's free events.
We are already 554 people!